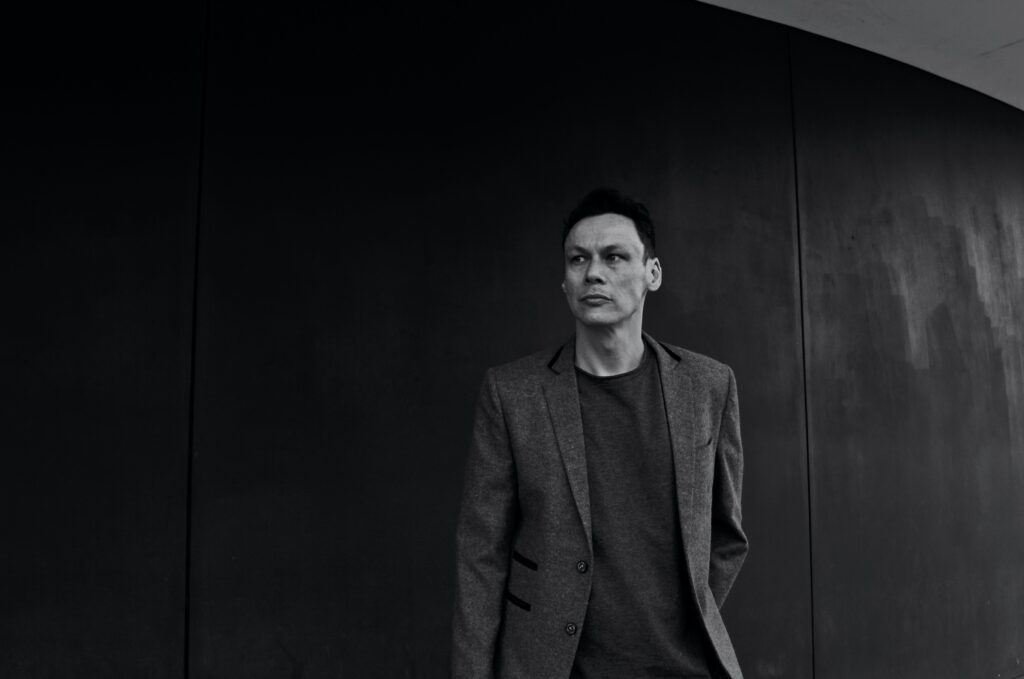 “I want this music to be quite relentless, tough and raw”

On his latest LP, the influential British techno producer Luke Slater decided to go ‘Skyscraping.’ Following up 2021’s self-explanatory ‘Say it Loud’ album on Token, the ten track digital collection included killer cuts like ‘Labstract’, ‘One For The Groove’ and ‘The Drag Train’ and was also available on liquorice pizza, the format known to some more vintage listeners as the vinyl long player. And on that superb new ten track long player, Slater draws not only on studio material but also components recorded during the acclaimed Planetary Assault live show – and he’s keen to let fans know that the focus is well and truly on the dance-floor. ‘Sky Scraping’ is a loud and unashamedly upbeat celebration of the formative and familiar environments so loved by the electronic music community, the clubs and festivals made special by that unique ability of bringing people together. And released via Token, the Belgian label who celebrated their 100th release with Luke with the booming EP opener ‘Bang Wap’. Resident Advisor described the track as “PAS at its most elemental” and later included it in their round-up of the year’s key releases.

A phrase that comes up a lot is “have I got something to say?” so and for the best part of an hour, Slater most definitely does. “Before I started writing, there was there was some great music in the UK dance music. Well-produced and with the melody in the right places. But I wanted something a bit more ballsy and with drive. I kind of wanted that in the records. I remember when Jeff Mills released an EP as Final Cut and I remember listening to that and thinking: “wow, so this means it really can be that hard!”

When we speak late December to talk music, life and new adventures, Luke is at home near Horsham where he now lives: West Sussex to be precise. “I think that’s one of the weird things I enjoy the most about living around here,” he smiles. “Absolutely no one understands anything about what you do so I’m kind of incognito! Occasionally an older tradesman will say they went to Tribal Gathering back in 1991 but that’s it. Which is a beautiful thing, I guess.”

A key player on the UK (and now global) techno scene, Luke Slater has been a firm fixture on all the right electronic line-ups since the early nineties, and like fellow electronic visionaries and sonic sorcerers like Sven Väth and Richie Hawtin, he’s never stopped to smell the proverbial roses. Born in Berkshire, he’s a major player with a sound and (punk) attitude that’s impossible to miss and yet despite all of that success, he’s always kept his artistic feet on the ground. That’s extremely evident as we chat over Zoom for this new interview as 2022 comes into view. “I think I’ve got more fire now than it had in the beginning. And I like that. I remember talking to Derrick May back in the 90s at a café in Belgium and all we talked about was the hunger. And the hunger was born out of the life you’ve lived, how you grew up and what you went through. And the situation for me growing up, although I didn’t have a bad upbringing, it was flippin’ hard, man. The world was not how I wanted it to be and I didn’t fit in. People romanticize the 90s but the path was not easy. I don’t want to be bogged down by the rules. Society. And unfortunately, that’s something that’s even stronger in me now.”

A bona fide pioneer of sound design and performance with a singular musical vision, Slater first minted the P.A.S. alias back in 1993. Since then, Planetary Assault Systems has become a byword for hypnotic, soulful and funk-heavy techno that blurs the lines between pure psychedelic and peak-time, main room techno for audiences large and small. Whatever the environment, Luke Slater’s work as Planetary Assault Systems captures the very best elements of techno for audiences across the globe. Crucially, this is music with a huge vision and scope, meaning Luke has fans across the world, from London and Berlin to Detroit via Dekmantel and back. It’s no accident that his latest album comes to a close with the classic sonics of ‘Nano Chameleon’: this futuristic, forceful slice of funk is powered by white noise percussion and never lets go for a minute. It’s the same spiritual ethos that has powered Luke’s own mind-set since the early days and it’s no accident that he’s been called “one of techno’s most chameleonic enigmas” in the past. And when you’ve released on labels from NovaMute and Ostgut Ton to Peacefrog and his own Mote-Evolver imprint, you’d be a fool to argue against the karmic chameleon.

As an artist, he also used different monikers for different musical lanes: L.B. Dub Corp and the aforementioned Planetary Assault Systems to The 7th Plain and of course his own forays into artist albums on NovaMute as Luke Slater and in 2020 he released ‘Berghain Funfzehn’ which looped and tweaked sounds from the acclaimed Ostgut Ton imprint and created killer new compositions as a result. Looking ahead, it’s clear that Luke the early solo misfit still feels like he has a considerable amount of musical goodness left to give. As a remixer, his musicality has made its way onto oodles of global icons, from fellow former Mute icons Depeche Mode and Octave One to Kenny Larkin, Madonna and Daniel Avery, who enlisted Luke to remix ‘Diminuendo’ in typically deep, pounding style in 2019. (“Good golly!” commented one fan online when it dropped and we can’t help but agree.)

Those early days were never more magical than when he was a resident at Heaven’s Soundshaft back in ‘89: even thirty years on, the memories make him smile and his eyes light up in delight. These were formative experiences that have never left him. “The club night was called Troll. And there was a club attached to it called Soundshaft, which was a smaller one. You could get into it through Heaven on a Saturday, through the little door and it was a mixed gay night. They used to have people going down there like Leigh Bowery. It was just an amazing short lived club. And it was so nice, it was a melting pot of different styles. There was a DJ called Steve Bell who looked a bit like Freddie Mercury but with blonde hair and the music was house and acid. And yeah, there’s some Italian stuff coming in! And it was a big range of stuff that was coming out and all that got played. And so you couldn’t really call it a techno club or a house club. And I think we all felt like misfits in society. And, and it felt good to be amongst those sort of people!”

After this, Luke opened a store in Brighton called Jelly Jam. “But basically selling techno everything that I liked. So I’d go and pick up all the records from the distributors and bring it all back down to Brighton.” He started making records with a friend “and we did some records under a label called Jelly Jam. And that was linked to the studio and the actual distribution of it. And those first records were done in that studio with a lot of samples… but we did. We did one there called ‘The Pounder’. And suddenly in about ’91, the distributors were telling us that this record was massive in Germany.” But ultimately he wanted to be a solo (machine) operator. “I didn’t want to have to rely on anyone,” he shrugs. “That sounds like a massive insecurity but I guess that’s just the way and how I was formed. The idea of being able to do everything yourself and making everything yourself was a big drive.” Key albums followed like 1997’s ‘Freek Funk’, 1999’s ‘Wireless’ and 2002’s ‘Alright On Top’ with soul-flecked vocals from The Aloof’s UK frontman Ricky Barrow.

But in the early 2000s, global techno – even in Ibiza – got lost in a particularly gloopy soup called minimal. “And by 2007, I was getting a bit pissed off because minimum was very boring. And it wasn’t really my cup of tea. And I thought “you know what? I’ve got to get back in the saddle!” Because I’ve really got something to say and that’s the best thing! Have I got something to say? So I just started thinking about the right label to release something and I thought well, I’ll do it myself! You know, I’ve been with new NovaMute and all these labels in the past and I thought I’d start my own label, which is what happened in ‘94. I was thinking more about the live show, I was thinking more about the fact that the technology was there and I could play this music live, even going back to some of the ‘94 stuff. And I could represent it in a real way. So it became a serious thing in my head that I wanted Planetary to be a really special live show. With visuals, new technologies and ideas. And that’s what I worked on, a 3D screens show and I’ve done shows with the sax player and there’s been a few incarnations of ways to play live. That’s become a big, interesting topic for me: the idea of entertainment and how to represent things to an audience.”

And the phrase ‘better late than never’ was never more apt than in 2020, when Slater was finally bestowed with a two hour Essential Mix on BBC Radio One. “Yeah, that was a bit of a surprise! I mean, I always think it’s a win if someone has been supportive. I’m very thankful.” Is there anyone he’s surprised was a supporter? “That’s a good question. Well, surprisingly, I was actually surprised when Sven really supported my music. Because I remember when he was doing IQ Records and it was always very trancey! So I always felt we were kind of a million miles away. But over the years, we kind of got on a bit of a wavelength and that’s nice.” So Luke is happy with his lot. There’s plenty ahead. “Yeah, this feels to me like progress. When people love what I do, I’m just really thankful. It’s important for me to represent where I come from.”